INTERVIEW: Why Pink Sweat$ Makes Music That Is The Opposite Of What You Expect

If you’re into the kind of delicately plucked acoustic guitar that makes you wanna sit around the fire and an R&B voice that’s so velvety that you may as well be pouring hot chocolate into your ears, then look no further than Pink Sweat$.

Philly-born and LA-based, 27-year-old crooner David Bowden knocked confidently on our hearts last year with his first EP, Volume 1, and his break-out single Honesty, and ended up making a comfortable little home for himself in our playlists. It’s easy listening – but not in the condescending way people use to describe music that they think is safe and appeals to everyone under the sun. Pink Sweat$ self-describes it as “very minimal’ and relaxing, but the hooks are plenty. Just listen to Coke & Henny Pt. 2.

We caught up with Pink Sweat$ just a few weeks out from his very first visit to Australia as part of Falls Festival, though he spent a couple of nights playing headline gigs in Sydney and Melbourne too.

Firstly, you’re in Australia very, very soon for Falls Festival! How are you feeling about it? Have you heard much about the festival?

Will this be your first time in Australia and what are you planning to do when you get here? Do you have a bucket list of stuff?

Obviously you’ve just dropped a Christmas song, a cover of This Christmas, what was it like recording that one and hearing your voice singing alongside a legend like Donny Hathaway?

I like to say it feels like I got to cheat time. Although I didn't grow up listening to Donny Hathaway, when I found out about Donny Hathaway, which was way prior to the song, but after listening to the music, I was actually practicing for a role, a movie role. I was listening to Bill Withers, and then I came across Donny Hathaway, and I was just listening but it was like the universe kind of lined it up, because that was many many months ago. Then I fell in love. [Starts to sing Donny Hathaway] I was like, this is fricking amazing. Yeah. So then, like six months later, an opportunity to do this Christmas song came and I was like, wow, look at that.

Do you have older family members who listened to Donny and are mindblown to hear your voice alongside him?

Oh yeah, yeah, they’re like, this is amazing. They love it.

So tell me about this movie role!

I don’t know if I can talk about it… I’m playing a pretty cool musical role. It’s music-based but not a musical.

What were you like in school? Did you have lots of friends, were you a jock?

At school, I was pretty much just a follower. I’d follow whatever was happening. I wasn’t that into music as a kid, in my neighbourhood we didn’t have much music going on. We just had a lot of drug dealers. They took all the music programs out of all the poorer schools in America.

So you didn’t find music until a bit later on in your teens huh?

Yeah, I was a teenager. I used to play drums in church. I don’t know what churches are like in Australia but in America there’s like thousands and thousands of them, some of them are really tiny. You can go into a church on a corner, like 40 people, and that's the church. You know, I kind of grew up in a church like that since I was like six years old, and every Sunday, I'll play a song and I get a little better each Sunday. So, guess that was my music freedom because they don’t really judge you, you just keep playing and they say, ‘oh you’re so good!’ But I sucked. And then one day you get better, you know?

Were you singing in church or just playing drums?

Yeah kind of like choir stuff, but I didn’t look at myself as a singer or someone who could sing.

I wanted to talk about your musical influences because they seem really varied – songs like I Know are so bluesy but obviously Coke & Henny Pt 2 is very R&B and you also use a lot of folky acoustic guitar, what kind of music did you grow up listening to? I know you’ve talked about Prince and Michael Jackson. What about contemporary stuff when you were in school?

Anything that was playing in the club, honestly. I usually listen to music to understand what everybody’s doing, then I just do the opposite. I was going to the club every night, listening to dope rap songs and stuff. I like rap. I didn't grow up on rap, but I enjoy rap a lot. But I was like, I don’t wanna make those kind of songs – I just like listening to them.

I want to make songs for the people who, you know, they want to take a break from that. So then I can be like, ‘Oh, I got some other stuff.' That's like completely opposite. So if I'm with my girl or someone’s with that guy, wherever they are, they can just wind down. Very minimal sounds, I want you to relax.

Do you play guitar yourself on the songs?

I haven't perfected my guitar playing yet but I usually just play in the studio, record stuff, now the new album that I’m doing, I’m doing a lot of keyboard, drums, bass, so the album is 90% live and I’m playing most of the instruments. For me, it’s my first official album, man. I'm looking at it as my legacy. When I'm like, not here on this earth anymore, I always say that people will listen to my songs when there are flying cars. Where people are watching a movie in the future with flying cars and they’re playing Pink Sweat$.

I mean, that's totally gonna happen because think about the Donny Hathaway thing, that was recorded decades ago and now we’re listening to it now with your voice on it.

Exactly, that song is the perfect combination of what it is that I'm trying to accomplish. I want people decades and decades from now, you know, calling my phone or call my estate, you know, to try to get something cleared. Like, ‘hey, can you get this song Honesty cleared?’ In 2099.

I love that your goal is to have an estate.

I read that you struggled through a condition called achalasia which affects your esophagus? Does that still affect your singing today?

Not at all. I mean never really affected my singing per se. Eventually if I didn't get help, it might have but it was more so just dealing with the disease because it breaks out in your whole body. But I was able to get help.

I had achalasia when I was like, 19. I don't understand the disease, it’s rare and there isn’t much research on it. So hopefully I can raise some money for some research. Luckily with the bit of research we have, I went to specialists and they cut me up as a short term thing – so I’m good for about 10 years, that’s how far the research goes. I'll be good for 10 years.

Tell me about the Pink Sweat$ pseudonym, people started calling you that because you wore pink sweatpants a lot? How come you did?

I probably got them from like Forever 21. Something weird. Honestly I was just wearing them because it was easy, it wasn't like intentional. It was just, I was in the studio every day. A lot of musicians probably can understand more - like sometimes you just kind of keep the same thing on because you've really got nobody seeing you. You’re in this dark room, making music, trying to change your life. That was more so what it was, yes. It was one of those things where the universe chose my name for me.

Then the dollar sign had a lot of meaning. Because I just always felt like when I was coming up as a songwriter and producer, there's a lot of bad people out in the world. Who take and manipulate artists, creators, and I felt like people would always try to make me operate out of my passions and only passions. And in the music business a lot of people’s flaw is that they’re so passionate that they forget that they gotta eat, and they shouldn’t be sleeping on their grandma’s couch ‘til you’re 50.  You need money and in order to get money, you gotta pay attention to your business and that's why I put the dollar sign in it because I was like, it's not all about the money but the money's in it. So that's why I made it the last S and not the first, because your passion comes first. But you can’t forget about the dollar sign, you gotta eat.

Do you pay attention to the music business then, in terms of charts and streaming positions and stuff like that or do you just keep aware of what your team's doing?

I don’t really pay attention to the chart stuff that much, because I know I’ve only been an artist for like a year and I'm aware that I'm doing well. But it's not enough for me to be like, I need to check the charts every day because I'm just getting my foot in the game. Like, for me, I had to stay on top of my contracts. Make sure everybody are doing what they’re supposed to be doing. And also, you know, just make sure I'm asking the right questions all the time over and over. Make sure when stuff gotta get done, I gotta sign off on it. You know, so it's not like somebody else is controlling my decisions.

Who are 5 artists you would love to collaborate or have dinner with?

What do you wanna achieve in the next 5 years?

I wanna definitely be a Billboard top 10 or top 5 with a ballad. And I wanna look after my family and put them in a better situation. My brother and mum live in Philly. Buy them their own spot.

What’s been the highlight of your career so far? 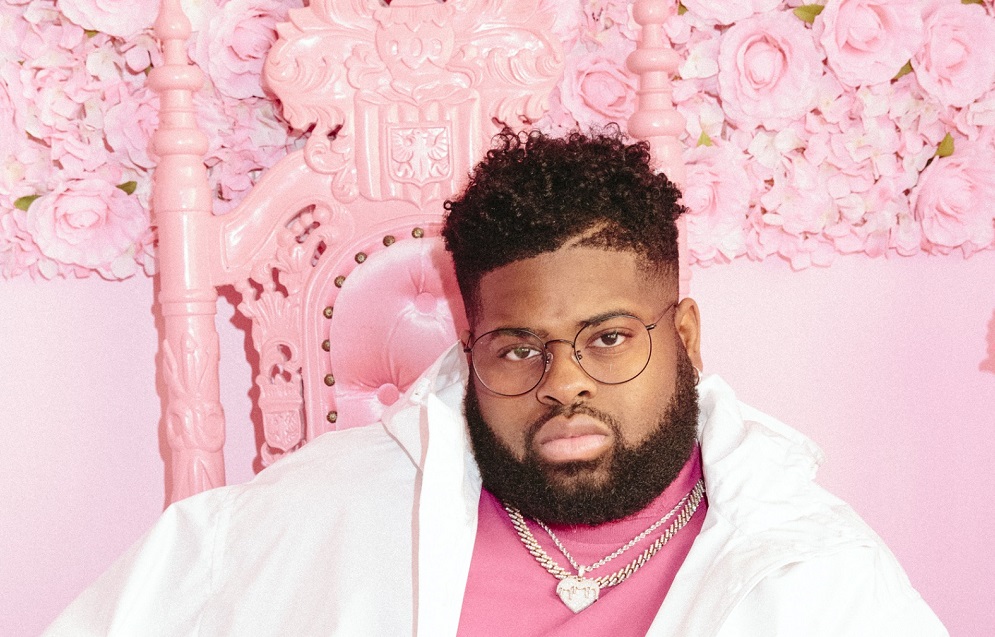