Our Favourite Moments, Memories, And Memes From This Year’s VMAs

This week has seen the return of one of the music industry's biggest events, with the MTV Video Music Awards taking place in New Jersey on Sunday evening.

As expected, it was a high-profile affair, with a number of world-class performers – Lizzo, Blackpink, Anitta, and J Balvin – lining up to perform at the annual event. And of course, that's without mentioning the winners, which included the likes of Jack Harlow (who took home four awards), Billie Eilish (who took out Song Of The Year for Happier Than Ever), and Taylor Swift (who received three awards, including Video Of The Year).

But like every year, the VMAs were a night to remember due to all the happenings at the in-person event. Thus, to make sure you're up to date with everything that took place at the awards, we've put together a list of our favourite moments, memories, and memes of the night.

Fergie Teams Up With Jack Harlow

When it comes to the biggest winners of the evening, it's hard to go past Jack Harlow. Namely because of the fact that he received a massive four awards (Best Collaboration, Best Art Direction, Best Visual Effects, and Song of Summer) from high eight nominations.

To celebrate, Harlow was on hand to perform a rendition of his award-winning track, First Class, as the opener for the evening. But to make things even more exciting, the performance saw him team up with the iconic Fergie of the Black Eyed Peas for a mashup of her 2007 single Glamorous, which he sampled for the track.

Fergie's appearance, her first since 2018, served as a massive highlight of the evening for countless fans, and helped to set the bar for what was to come for the rest of the night.

Taylor Swift bopping to Fergie performing at the #VMAs. pic.twitter.com/cGmzHLkjNL

The 2022 MTV VMAs were almost always going to be a big one for Taylor Swift. In addition to receiving five nominations for All Too Well: The Short Film, Swift ended up taking home three trophies, including Video Of The Year, Longform Video Of The Year, and Best Direction.

However, it was when she accepted the Video Of The Year award that she dropped her biggest bombshell, announcing the release of her first album of new material since 2020's Evermore.

“I wouldn’t be able to re-record my album [Red (Taylor’s Version)] if it weren’t for you," Swift told fans. "You emboldened me to do that. And I had sort of made up my mind that if you were going to be this generous and give us this, I thought it might be a fun moment to tell you that my brand new album comes out October 21st. And I will tell you more at midnight."

Indeed, at midnight in the US, Swift took to her website and socials to reveal that her new album, Midnights, will be arriving on 21st October, describing the new record as "the stories of 13 sleepless nights scattered throughout my life".

Taylor Swift got to WORK writing that album after all those private jet memes were bringing her down.

When you have an honour called the Global Icon Award, it's fair to say that there's a little bit of gravitas that comes along with it. Of course, with the Red Hot Chili Peppers in the midst of their latest career renaissance, it made sense for them to take it home. Likewise, it made just as much sense for the great Cheech & Chong to present them with the award.

Having also won the Best Rock award for Black Summer, the Red Hot Chili Peppers used their acceptance speech to pay tribute to their fallen brother, the late Foo Fighters drummer, Taylor Hawkins. "I want to dedicate this to Taylor Hawkins and his family," said drummer Chad Smith during the group's speech. "Fly on, Hawk. Fly on, brother."

Continuing their tribute, the band performed both Black Summer and Can't Stop at the ceremony, with Smith's drumkit featuring both a hawk and the word "Taylor".

On the stranger side of things at this year's awards, two of hip-hops GOATs – Snoop Dogg and Eminem – joined forces for a digital performance of From the D 2 The LBC.

Having already been nominated for the Best Hip Hop award, the pair appeared in partnership with Bored Ape Yacht Club creators Yuga Labs, joining the metaverse to perform their track as their own NFT avatars inside of the upcoming game Otherside.

However, the highlight of their *ahem* joint performance likely was near the start of their heavily-censored appearance, which opens with Snoop smoking some of the chronic from a gigantic university cigarette. A fitting return for two of the biggest names in hip-hop history, we can't help but wonder if it would've been more impactful if it wasn't sponsored by NFTs.

Having scored nominations for Best New Artist, Group Of The Year, and Best Alternative, it was no surprise that Italian rockers Måneskin were going to ensure that their performance at the VMAs would be one to remember.

Thus, when bare-chested frontman Damiano David kicked off the track, he surprised audiences the world over with his revealing black leather pants, complete with matching thong. However, when Victoria De Angelis' top fell down, MTV deemed the little bit too revealing for home viewers, zooming out of the performance frequently in order to keep things family-friendly, simply showing audience shots instead.

Regardless, Måneskin were simply happy to be invited, and honoured to become the first Italian group to take home a VMA. "We didn’t expect to [win],” David said. “There’s a lot of great, great artists here, so it’s an honour for us, of course.”

The most hilarious thing about the #VMAs was every time The CW had to hit the panic button. They not only did not let Nicki “go down and kiss it”, they censored David from Måneskin’s ass and the title of Latto’s “Pussy”

Lizzo Performs 2 Be Loved (Am I Ready)

Nominated for five awards at this year's VMAs, Lizzo might have only received the Video For Good award for About Damn Time, but she wasn't going to let the night go by without a world-class performance.

Taking to the stage early on in the evening, she performed a stellar rendition of both About Damn Time and 2 Be Loved (Am I Ready), appearing in front of a giant screen with her dance moves designed to sync up with the visuals on display. Undeniably one of the biggest and most joyful spots of the night, it's set to go down as one of Lizzo's most iconic performances to date.

When Bad Bunny took out the Artist Of The Year award, viewers could be forgiven that this was set to be the most-talked-about Bad Bunny event to come from the awards. However, it was during his performance of Tití Me Preguntó that the Puerto Rican rapper and singer made headlines.

During his performance, the 28-year-old leaned over to kiss a female backup dancer, complementing this action by kissing a male backup dancer as well. As one would expect, the conservative side of the audience were none too happy. However, the overwhelming response was one of positivity, with countless fans describing it as one of the most iconic moments in MTV VMAs history.

Bad Bunny kissing a guy at the VMAs. That’s it. That’s the fucking tweet. We have a chance boys!!! #VMAs pic.twitter.com/SoWyZuWTDF

Bad Bunny kissing a girl then a guy on stage of Yankees stadium and the MTV Video Awards was a fucking serve.

While Nicki Minaj might have won the Best Hip Hop award for Do We Have A Problem?, it was her winning the Michael Jackson Video Vanguard award that opened things up for one of the biggest performances of the night. As is tradition, Minaj was on hand to perform a medley of her iconic hits as part of the award, taking fans through a history of iconic hip-hop.

Kicking things off with All Things Go, Minaj took fans on the very definition of a musical experience, spitting hot fire during the likes of Monster, Beez In The Trap, Chun-Li, Super Bass, Anaconda, and more.

BLACKPINK enjoying themselves during Nicki Minaj's performance at the 2022 VMA's. #BLACKPINK #VMAS pic.twitter.com/qaozgFzHkK

Having been one of the most-talked about celebrities of 2022, you could expect that the MTV VMAs might have mention to Johnny Depp in some capacity this year, but few could have expected his cameo appearance as the iconic Moon Person.

Appearing via his face only, Depp poked fun at his career status, noting that he only turned up because he "needed the work".

“I just want you guys to know I’m available for birthdays, bar mitzvahs, weddings, wakes," he added. "Any old thing you need.”

Of course, some commentators have found the appearance to be somewhat polarising, with Depp's musical career rarely, if ever, scoring a mention on MTV, leaving some believe whether he was simply shoehorned in for the sake of controversy. Either way, it's got the world talking about it, so, mission accomplished?

Johnny Depp said if there’s going to be a joke, I’m going to make it and I love that for him 🤣👏🏼 (via his and MTV’s insta) #JohnnyDeppRisesVMAs #MoonManDepp #VMAs pic.twitter.com/LXvxPc47MX

“you know what, i needed the work”
— johnny depp at the vmas pic.twitter.com/75vAIvK5gD

You know what’s wild about Johnny Depp’s appearance at the VMAs? Before this year, they have never made a point to even mention his ass in regards to ANYTHING music. This was some weird, intentional, line-in-the-sand ass stance they arbitrarily took to piss people off. 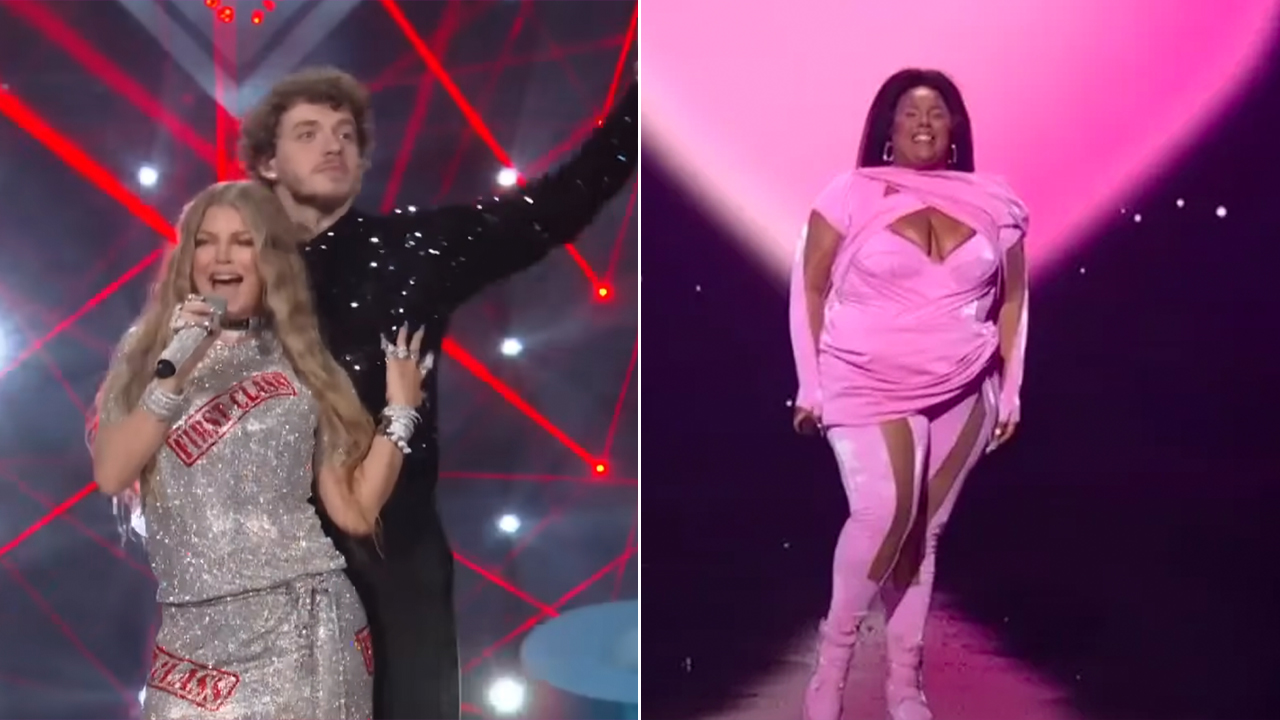