We're focusing on rap this week to celebrate the launch of our new Sydney club night, RAP SZN. Check out the event here and follow us on Instagram here.

After dusting ourselves off of the tackiness of the early aughts, we entered 2010 ready for something new. As music shed its gaudy obsession with the internet, it was forced to tackle an issue birthed from the very thing it loved — piracy. Illegal music downloads threatened the downfall of the entire industry, but with the popularisation of streaming services, piracy began to fall. But what began as a means to end one evil has completely transformed the way artists create, record and release music.

The last 10 years has been a whirlwind of firsts. New records were made, old ones were broken and a new guard of classic albums have been etched into music history.

We often ruminate on the classic sound of the '90s, but how do we characterise the sound of the 2010s? One word: boundaryless. Categories have dissolved and genres have melded into multi-hyphenate entities that combine rock, pop, country nand hip-hop. This fluidity has seen social media sensations challenge Billboard's definitions of genre, inflections of Atlanta trap shine on New York rappers' albums, and pop singers turn into hard-hitting MCs.

Looking back at the last 10 years, it's clear that the most important albums are the ones that will influence the music of the next decade.

After Kanye West's infamous run-in with Taylor Swift at the 2009 VMAs, and subsequently becoming the most hated man in America, West set off on a journey to atonement. The result was months of studio sessions, astonishing collaborations, and sleepless nights, culminating into his most celebrated album yet. My Beautiful Dark Twisted Fantasy was released on November 22nd, 2010 and went on to define an entire decade of hip-hop.

West's unusual approach to collaboration saw his experiments pay off. His most triumphant moment is on All Of The Lights where he layers vocals from 14 artists including Rihanna, La Roux, Alicia Keys, John Legend, Drake, Fergie, Kid Cudi and Elton John. MBDTF isn't just touted as West's best work, but as one of the best albums of all time and there's no doubt as to why.

Two Kanye West albums on one list may seem like overkill, but we can't review the last decade without talking about Yeezus. The rapper's sixth studio album was a sharp left turn for hip-hop fans, who were initially perturbed by West's newfound infatuation with techno. Enlisting producers like Brodinski, Gesaffelstein and Hudson Mohawke, Yeezus was truly genre-agnostic and quite unlike anything that had come before it.

Despite its initial critical reception, Yeezus has gone on to influence the entire landscape of hip-hop with electronic producers becoming key players in the genre, including work between Gesaffelstein and The Weeknd, Cashmere Cat, James Blake and Travis Scott, as well as Drake.

When Queen Bey released her audio-visual ode to one of the most difficult periods of her life on April 23rd, 2016 it was unanimously decided that she had outdone herself. Already celebrated for her slick R&B salvos, Beyoncé pushed her sound further out of its comfort zone with booming 808s (Formation), an homage to her country roots (Daddy Lessons) and disparate electronica with James Blake (Forward). She rapped, she sang, she screamed.

But it was her visual accompaniment to the record, that truly saw the Houston star shine. Meticulously produced, each music video brimmed with irreverent frankness, whether it was directed at the police, Jay-Z, or Becky with the good hair. Lemonade raised the bar for artists across all genres.

2019 was the year of Megan Thee Stallion. The first female rapper to sign to 300 Entertainment, the Houston hottie has since become a dominant force in the rap game. Eschewing the typical cat fights and rivalry other women rappers have been cornered into, Megan has chosen instead to collaborate with her peers, enlisting hip-hop giant, Nicki Minaj and Ty Dolla $ign on her most successful hit, Hot Girl Summer.

While Fever didn't achieve the mainstream success many people thought it would, the mixtape's influence is undeniable. Megan has honed her skill as a rapper over the last decade, and it shows. Her exuberant rhymes ricochet over steady drums and phased loops. At her best, she's coquettish, dominant, and a musical tour-de-force, laying down lessons on what it means to not only be a rapper but a fully-formed entertainer. Without a doubt, up-and-coming rappers will be studying her work for years to come.

Before Migos burst into the mainstream with Bad And Boujee, hits like Versace and Hannah Montana had turned the trio from regional Atlantan rappers into nationwide stars. Worldwide success was just around the corner, and Bad And Boujee brought them to the forefront of hip-hop.

The anticipation for their sophomore record, Culture was through the roof, and Migos didn't disappoint. With Offset finally out of jail, Quavo and Takeoff were revitalised and the trio's chemistry reached new heights. Guest appearances from DJ Khaled, Lil Uzi Vert, Gucci Mane, 2 Chainz and Travis Scott made Culture a streaming success. But it was their second single, T-Shirt which saw Migos continue on their winning streak. It's no secret that Atlanta trap has overtaken hip-hop over the last decade, but Migos singlehandedly took their iconoclastic sound to places the genre had never been — the pop charts.

Over the last 10 years, sad boy rap has become synonymous with hip-hop all thanks to one Canadian rapper named Drake. It was none other than his second studio album, Take Care, that brought the rapper's idiosyncratic sing-song flow and raw emotional fodder about girls, exes and side chicks to prominence.

Take Care became the quintessential 'I miss my ex' album inspiring Instagram captions, tweets and a new culture of sad boys online and in music. It's difficult to imagine what hip-hop would sound like without Drake's unequivocally large contribution to the genre. Across the record's three biggest songs Marvin's Room, Take Care featuring Rihanna and Headlines Drake seamlessly glides across R&B, pop and trap making him a chameleon that everyone aspires to be.

Kanye West protege, Travis Scott has transformed himself with each and every album, emulating his mentor whenever he can. But it was with his sophomore record, Birds In The Trap Sing McKnight that the Houston rapper silenced his detractors and stepped into his own.

The record in itself is a hazy journey filled with plumes of smoke and scattered production. However, in between these seemingly unpolished moments, magic happens. From Kid Cudi humming on Through The Night to the Young Thug assisted, Pick Up The Phone, Scott expertly delivers an album that isn't just a culmination of Southern rap, trap and autotune but a burgeoning trademark sound. You know a Travis Scott song when you hear one, and Birds In The Trap was the beginning of the young rapper finding himself.

When you think about the ever-changing landscape of hip-hop, one name that immediately comes to mind is Cardi B. That's because she's successfully turned an impressive social media presence into being a global phenomenon, but the road to success wasn't always easy. Most people became familiar with the Bronx rapper after her breakout hit, Bodak Yellow but few know of the rigorous journey that came before that.

After two mixtapes, a stint on reality television and a legendary career as a stripper, in 2018 Cardi released her most personal project yet. The rapper's debut album, Invasion Of Privacy was released to critical acclaim and debuted at #1 on the Billboard Hot 100. Each song on the record serves a purpose, from raw meditations on infidelity (Be Careful, Thru Your Phone) to Latin-flavored bops (I Like It) Cardi is present, effervescent and teeming with charisma. Ultimately, Cardi proves that being yourself pays off.

"When is Luv Is Rage 2 dropping?" became a catch-cry on Twitter in 2017 after Lil Uzi Vert continued to push back the release date of his most anticipated record. After promising its release in February, fans were made to wait until August 25th when the tape dropped at midnight. Part of the obsession was due to the cult following his single, XO Tour Llif3 inspired.

Uzi's innate ability to meld pop-punk and emo textures with hip-hop contributed to the rise of emo-rap. The term was coined after an influx of rappers like the late Lil Peep, Yung Lean and Lil Tracy tackled topics like self-harm, suicide, drug use and depression with inherent sincerity, using soundscapes popularised by bands like Underoath, Brand New and Death Cab For Cutie.

10. Santigold - Master of My Make-Believe

Following her genre-bending debut record, Santigold followed up with Master Of My Make-Believe a polished assortment of genre-agnostic, pop-infused songs. The producers on the record were just as diverse, with work from Boys Noize, Q-Tip, TV on the Radio's Dave Sitek and Nick Zinner of the Yeah Yeah Yeahs.

Master Of My Make-Believe laid the groundwork for the rest of the 2010s, with Santigold's go-to producer Switch becoming an industry stalwart. After the Santigold-sound found its way to Beyoncé (Run The World (Girls)), her rebellious dismissal of genre informed the rest of hip-hop and will continue to well into the future. 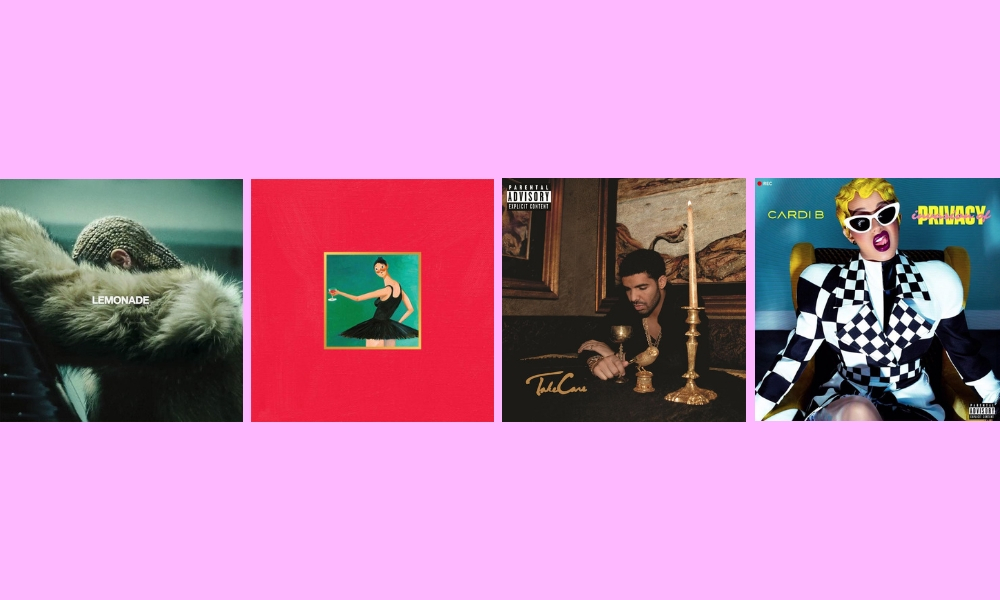