GOT YA BACK: Bid On One-Off Designed Bags By The World's Biggest Musicians For Charity

We here at Cool Accidents have been working on a charity initiative to throw some love and support back to the music industry who is suffering greatly under the pressure of the global COVID19 pandemic.

Introducing GOT YA BACK, our 2020 charity initiative where we've enlisted 17 amazing musicians to hand design and pack a backpack full of exclusive items, including Bazzi, Rita Ora, A Boogie Wit Da Hoodie, Charli XCX, Grouplove, FOALS, Gerard Way and many more, with all bags to be auctioned off and all proceeds donated to Support Act.

The bags are absolutely one-of-a-kind - once it's gone, it's gone - and they're all filled differently. Some include signed merch, personal notebooks, tour memorabilia, Polaroid photos, backstage passes, setlists and more - hell, Grouplove's bag is topped off with a ton of confetti from their live shows!

Got Ya Back follows up the blockbuster In Their Shoes campaign from 2013, where we auctioned off hand-painted shoes by the likes of Ed Sheeran, Bon Iver, Skrillex and many many more.

Below you can check out photos of ALL the bags you can bid on, including their amazing contents and some background info on when the bag was created and contributed by the artist.

We're hoping to raise as much money for Support Act as possible in what is a difficult time for the industry and we're so excited to launch this initiative with the help of some of the world's biggest acts. We love that these artists are able to give something to the fans that they can cherish, and in turn we can give back to the music community who need help getting back on their feet.

We've GOT YA BACK.

Completed during his Laneway Festival 2019 visit to Australia, Bronx rapper A Boogie Wit Da Hoodie went the simplistic route with his backpack design but made sure to shout out his record Hoodie SZN. He also filled it to the brim with exclusive signed merch backstage from Laneway - this bag contains a signed setlist, signed t-shirts, a signed drink bottle and even two Laneway AAA backstage passes.

Anne-Marie played a headline run of shows in March 2019 and we caught her backstage at Sydney's Enmore Theatre so she could draw on her backpack. She made sure to remind that you should always 'Speak Your Mind', be brave and be kind - plus there's a signed vinyl in this bag of her album, Speak Your Mind.

AUGUST 08 was in Australia in April 2019 and we made sure to catch him for a backpack drawing sesh. He drew a cartoon face on his backpack, as well as popped in a signed Chinese horoscope from his own wallet and a signed message in a notebook. There's also an 88Rising t-shirt for good measure.

Visiting Australia for a promotional tour in July 2019, R&B favourite Bazzi made sure to draw some words he lives by on his backpack. "Spread love, spread positivity, be a friend, tell the truth" are among the phrases he drew on his bag, which he filled with two lanyards from the intimate Nova Red Room show he played in Sydney - the AAA backstage pass is signed.

Charli XCX visits us in Australia fairly regularly, and in August 2019 she flew over to play a secret show in Sydney in support of her record, Charli. We caught her between interviews to design the most colourful bag we've got on offer. With some of her favourite songs written on the bag, along with some colourful scribbles that make the backpack look a bit like a Playstation controller, Charli filled her bag with a handwritten note from her hotel room, two t-shirts, Charli on vinyl and a CD single of 1999.

While visiting Australia in June 2014, British pop rock legends Coldplay designed this bag with cartoons of their faces, as well as filled it full of rare signed band merch. There's a setlist, a signed postcard and CD sleeve, a 4-disc CD boxset of their abums and perhaps most exciting of all, a used drumskin, signed by all four members of the band.

In March 2019, Death Cab For Cutie played some world-class shows at the Sydney Opera House and we caught them backstage so the band's Nick Harmer and Dave Depper could get their art and crafts on. The band went simplistic with their DCFC acronym right up the top of their backpack and even marked the exact time and date they completed the bag on the inside flap. In the backpack you'll find a signed setlist from their acclaimed Sydney Opera House show, a Thank You For Today vinyl signed by the whole band, three Kintsugi cassette tapes and an AAA backstage pass.

British rockers FOALS were in Australia in 2015 supporting their album What Went Down and we gave them a backpack to make their own. This bag is a jackpot for anyone who wants signed versions of Total Life Forever, Holy Fire and their latest, Everything Not Saved Will Be Lost Pt 1 on vinyl. There's also a signed pair of brand new Converse high-tops you won't want to dirty up anytime soon.

Visiting Australia back in 2015 as part of Soundwave Festival, My Chemical Romance's Gerard Way is the only one who kept his backpack plain - though he filled it with stacks of rare stuff you'll never find anywhere else. Among these, a Gerard Way t-shirt that's been cut and worn (possibly by him, but we can't be sure!), a journal filled with Gerard's own sketches and tour diary, three signed setlists, badgers, an AAA backstage pass and a signed Hesitant Alien vinyl. It's a chance to grab a once-in-a-lifetime piece of history for fans of the comic book and emo king.

Completed when Grouplove toured Australia in 2014, this bag is a bundle of surprises. The outside is painted with multicoloured paint splotches, while inside you'll find a hand-crafted chatterbox, a tour diary with Polaroids taken by the band and journal entries, red Converse high-tops, two t-shirts, a signed setlist and a lollipop. To top it all off, the backpack is FILLED to the brim with confetti from their show! This is one of the most fun backpacks we have on offer so don't miss it.

Though the just band released their latest album New Me, Same Us, off the back of their second album Nabuma Rubberband, Swedish band Little Dragon visited our shores for a tour in 2014 and made sure to have their way with the only black backpack in this project. In this bag you'll find a signed copy of the record, a journal with the band's own sketches from tour, a carton of tea, a used disposable camera (get this developed and see for yourself what photos are on it!) as well as a stress ball.

Completed in October 2019 while on tour, country star Morgan Evans decided to decorate his bag with some of the titles of his biggest hits, including Kiss Somebody, Young Again and of course, Day Drunk. Morgan made sure to sign an empty can of beer too, alongside a signed 'reserved' sign from a restaurant, a t-shirt, three guitar picks, two can openers and a notepad.

Ahead of a November 2019 Australian tour - his 10th in the country when you combine his visits a solo rocker and as the frontman of Matchbox Twenty! - Rob Thomas visited Australia on a short promo tour and we caught him in Brisbane. He designed the backpack keeping 20 years of his solo project in mind, though he also paid homage to Australia's Indigenous community by drawing a flag on the back of the backpack. This bag contains Rob's own Esquire magazine, a Chip Tooth Smile CD and signed tracklist, signed postcard, Rob Thomas custom breath mints and five of Rob's own guitar picks.

Back in 2015 when British boys Royal Blood were in Australia, they completed this "Bag Of Wonders" filled with an amazing array of exclusive goodies. There's a signed Out Of The Black vinyl, a roll of developed film photos shot by the band themselves while on tour, two signed notepads, a Two Tonne Skeleton 7" vinyl, a Gary Lineker's Action Replay DVD, a set of used drumsticks (not pictured), two Royal Blood t-shirts and a tote bag.

Designed by Rudimental's Kesi Dryden and Piers Agget, the British drum'n'bass group completed their bag backstage at their Sydney Hordern Pavilion gig when on tour in Australia in June 2019. The band drew themselves on the backpack, as well as the names of a few of their biggest hits, including Toast To Our Differences, Feel The Love, Summer Love and These Days. In this bag you'll find two sets of drumsticks, a handwritten note from Piers and Kesi, a setlist from their tour, a signed red drink cup from their backstage rider and five AAA backstage passes.

If you're a fan of the boy band Why Don't We, you'll love this backpack because the band signed everything they could get their hands on! The backpack itself is signed by all five guys, and inside you'll find a signed Why Don't We hoodie, a signed setlist, a signed photo of the band and a signed 8 Letters CD. There's also two bags of Why Don't We M&Ms (maybe just keep these as a memento, instead of eating them!) and a notepad.

Global pop-phenom Rita Ora filled her backpack with signed goodies including a CD copy of her 2018 album, Phoenix, a poster, setlist, drumsticks and some AAA passes. To top it off, this amazing one-of-a-kind backpack features love hearts hand drawn by Rita while in Australia for promo in 2019. 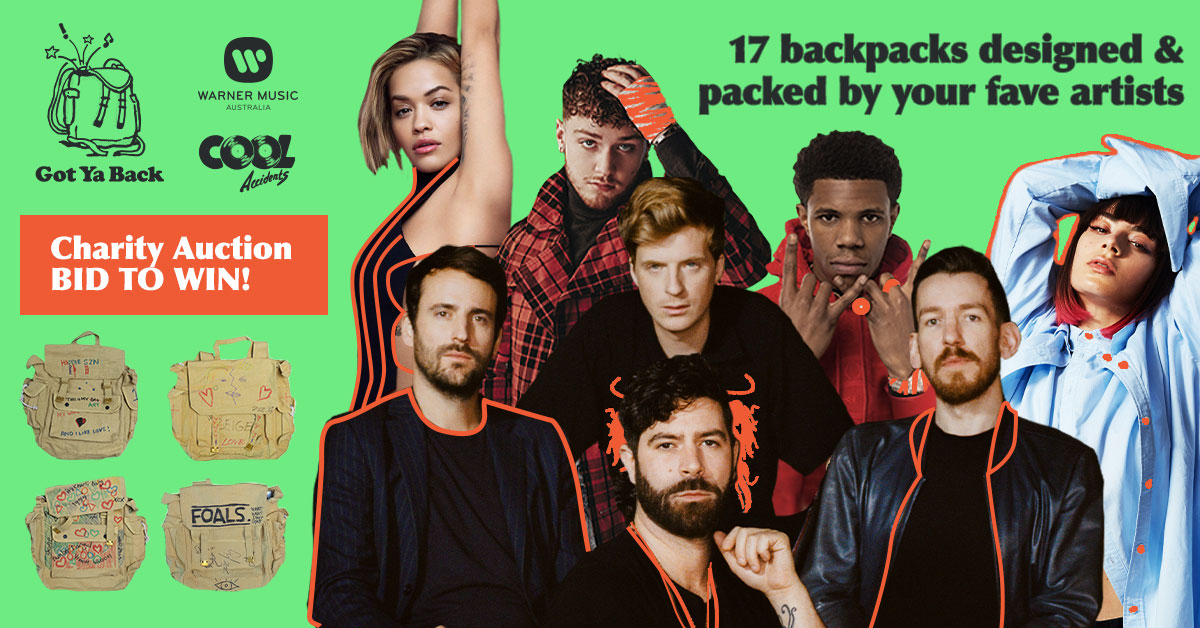