triple j's Hottest 100 voting for 2020 has been open for a little while now, but it can be a real struggle to put together just 10 tracks that you've loved this year, especially if you feel like you've forgotten something. There have been so many great songs released this year, it's no surprise it's been hard to keep track of them all.

To help jog your memory, we've put together 20 tracks that we think you should be considering for your Hottest 100 votes, and what makes each of them a standout tune. You've got until Monday, January 18th to submit your votes - get started ASAP!

Sydney rapper Hooligan Hefs has had a big 2020, but his last release of 2020 is his biggest. Send It is a summer-ready track that sees Hefs rapping over a huge EDM beat, and he's bringing the heat. Hefs works hard, and he parties even harder. When he and his crew rock up to the spot, you know it's going to be a big one.

We can see this track being a huge hit at the pointy end of a Hottest 100 party when everyone's in the pool chilling out and soaking in the summer sun. Just don't forget to Send It when you're having a good time!

Having made a name for themselves for their rock anthems, 2020 saw DMA's release their third album The Glow, which marked a change in sound for the band. They've conquered the Britpop sound, and now they had their eye on conquering the dancefloor with some serious club anthems.

Criminals is the highlight of their experiment to make pop tunes that were club-ready, and the track is a dance-fuelled, adrenaline-inducing rush. Lead singer Tommy O'Dell proves that he's got the range to carry a genuine party-starter - and this track will get your heart racing.

WAP might just be THE musical moment of 2020, and when Cardi B & Megan Thee Stallion got in the studio together, magic happened. It's a raunchy, sex-positive track that got a lot of people heated, and even more excited - for a moment, everyone was talking about the same thing.

WAP inspired a million memes, a million reacts and many many millions of listens. It's a track that will be remembered for a long, long time - so when you're putting together your votes for this year's Hottest 100, ask yourself if you're a "certified freak, seven days a week" and vote accordingly.

The Avalanches & Blood Orange - We Will Always Love You

Australian electronic wizards The Avalanches have just released their third album, We Will Always Love You, and its crowning moment is the title track featuring Blood Orange. Built around a sample from Hammond Song by The Roches, it's a love song of epic proportions - it's for the star-crossed lovers in your life (who knows, that might even be you)!

Blood Orange's voice adds a sense of weight to the track, and it's a juxtaposition of the past and present of music. You'll feel like you're looking up at the stars when you're listening to this track - which is exactly what the Avalanches were going for.

When Jack Harlow asked WHATS POPPIN, the answer was Jack Harlow. Released at the start of the year, WHATS POPPIN would go on to soundtrack 2020. It was a huge hit on TikTok, and it's easy to see why - when you listen to it, your body starts to move without you knowing what's going on.

The track was the lead single for his debut album That's What They All Say, and also came with a music video directed by Cole Bennett, who's worked with some of the biggest rappers in the game. Jack got us all hyped in 2020, and this is a track you'll want to keep in mind when putting together your votes.

We can't help ourselves when it comes to listening to Kita Alexander's huge track Can't Help Myself - one of the biggest Australian pop moments of the year. It's all about falling in love with someone you didn't expect to win your heart, and how you react to that.

Speaking about the track, Kita says, “For me it’s all about looking back at the first moments of falling in love and the thrill of it all. I don’t know why, but I always think of a very excited puppy when I listen to this song.” Who doesn't love an excited puppy?

Newcomer ASHWARYA's debut single got our attention from the very first notes of the haunting intro, and didn't let up from there. Psycho Hole feels like the soundtrack to a day spent in dystopia, and it's just as industrial and abrasive as it is catchy and melodic, and all the moving parts work together in unison to form a truly unique listen.

It's Billie Eilish meets Death Grips, and it's unlike anything we've heard coming out of Australia. The Indian-born, Melbourne-based artist knew how to make a first impression, and Psycho Hole might just be the soundtrack that 2020 needed.

2020 was the year Haiku Hands captured their live energy on record, releasing their self-titled debut album. One of the standout tracks from the album, Eat This Bass, is Haiku Hands at their most boisterous, and it makes for a hell of a listen.

The track sees them proclaiming proudly that they don't have any fucks to give - all they want to do is Eat This Bass. Turn your speakers up loud - this one will shake your walls.

There's no need to make things Complicated - if you're looking to vote for a great pop track from 2020, then Eves Karydas' huge single fits the bill. She's been one of our faves for a while now, and this catchy track sees her take things to the next level.

Written during a round-the-world writing trip, it's a single about feeling jaded, but not being able to pinpoint the reason why you're feeling that way. It's the perfect mix between salty and sweet, and you'll feel yourself relating to every lyric.

2020 was the year that Western Sydney artist flowerkid proved that he was one of Australia's most important voices - and this was never more obvious than with his single miss andry.

The track, which talks about flowerkid's distrust of men that stems from his past experiences, will make you confront your own feelings about gender, and how they've been shaped by society. It's a harrowing listen - but one that is deeply rewarding.

Joji's 2020 album Nectar was an evolution of his sound - but Gimme Love, a fan favourite from the record, contained elements of his past, present and future.

The track kicks off with some signature lo-fi hip-hop from Joji, before breaking open at the halfway point into his vocals sounding like they're coming from a higher power. Joji's evolution as a musician has been truly exciting to see unfold, and he's not done yet.

Tkay Maidza has always shown glimpses of greatness, but it's in 2020 that she realised that greatness with her album Last Year Was Weird Vol. 2. The album captures her sound as it was meant to be, infusing hip-hop and pop elements to blow everyone away.

The album's standout track, Shook, is about exactly that - exceeding people's expectations, and them not seeing it coming. Shook was the first taste of what Tkay had been cooking up - and it was a warning shot to the rest of the world.

Best known for her work with Paramore, Hayley Williams released her debut solo single at the start of this year, Simmer, and it's a track that contains a lot of Hayley's personal experiences with abuse.

The track, which comes from her debut album Petals For Armor, is her way of expressing her rage, and learning from it. It's her way of refusing to bottle it up - instead, Simmer sees her expressing herself in a way that allows her to reclaim her story.

Alex The Astronaut - I Think You're Great

Australian singer-songwriter Alex The Astronaut released her debut album, The Theory Of Absolutely Nothing, in 2020, and it's some of the most beautiful songwriting you'll hear this year.

While it's hard to pick the album's best song, it's hard to go past I Think You're Great, which is a reminder to check in on your friends. 2020's seen us re-connect with friends both old and new - and Alex is all for that emotional connection.

A collaborative effort between ODESZA, Golden Features and lau.ra, BRONSON's Heart Attack is the soundtrack for your next epic quest (even if that's just a trip to the shops).

It's a playful track that will get you dancing, and sees ODESZA and Golden Features melding their sounds together for a seriously smooth piece of house music. Get up and dance - you'll feel your body grooving to this one.

JK-47 is a savage, and he's not afraid to let you know. His debut album, Made For This, isn't just a collection of songs - it's a missile aimed squarely at those around him.

The Recipe is JK at his most potent, claiming that he's going to eat up the other rappers around him. His rhyme schemes are complex, and his flow is as confident as it gets. What more could you want?

Wafia knew what she was doing when she called her track Pick Me - how could you ignore that name when putting together your Hottest 100 votes?

It's a powerful track about self-empowerment and self-love, and was written after exiting a bad relationship. It's a reminder that love shouldn't try and change you - instead, your partner should embrace you for who you are.

In a short period of time, HP Boyz have managed to establish a signature sound, then flip that on its head. Coming off their debut EP, 6 To The World, Eeny Meeny sees the trio mixing in autotune to their rhyme schemes, adding a pop tinge.

HP Boyz have well and truly put South-East Melbourne on the map, and they're repping their area proudly. They're still Hampton Park boys at heart, but they're on their way to being global names.

Sloan Peterson isn't going to change herself for anyone, and that's the way she likes it. Her single Nightmare is a reminder that it's OK to know who you are and be strong about that - some people are just going to try and bring you down.

Speaking about the track, Sloan says it's a look at two sides of the same coin. “It’s written in a playful relationship sense but questioning the construct of being deemed bossy or controlling rather than assertive or driven." The track mixes electronic pop sounds with French rock from the 1960s - an eclectic mix, and just what we'd expect from Sloan.

READ MORE: 10 Of The Best Collaborations Released In 2020

E^ST's I Wanna Be Here is just the pick-me-up you need when you're feeling a bit down. It's one of the standouts from her debut album I'm Doing It, and it'll get you feeling ready to take on your next challenge.

E^ST wrote the track for herself, saying it was written "at a really difficult time in my life, and it's almost like I wrote the song that I needed to hear." Get the spring back in your step - the world needs you.

Put your votes in for the triple j Hottest 100 here. 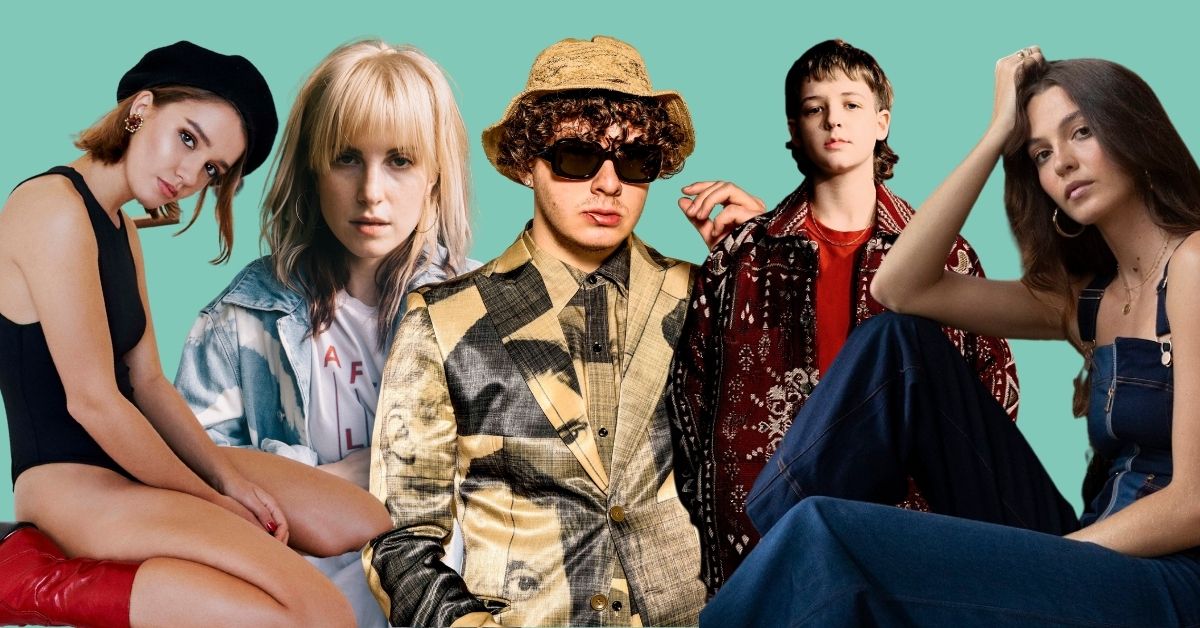