INTERVIEW: Why Saweetie Is The Feminist Icon You Need In Rap

She might be icy by name (her birth certificate literally says Diamonté on it), but Saweetie is nothing but warm by demeanour. The 27-year-old Californian rapper is gearing up to release her new record Pretty Bitch Music and she is exactly the type of “pretty bitch” she’s celebrating on the record – in her words, someone who is “pretty” is confident in their own skin, kind to others and carries their own energy, while “bitch” is like a feminist acrostic poem; it stands for Bossy, Independent, Tough, Creative and Hyphy (for the uninitiated, that's Oakland, California slang for "hyperactive").

The rapper first burst onto the scene with a killer freestyle set to the iconic beat of Khia’s My Neck My Back on her song ICY GRL back in 2017, and since then she’s jumped from strength to strength. My Type soared up the charts last year and now Tap In is doing the same thing, both songs sizzling with the braggadocious attitude we often hear from her boyfriend Quavo’s group, Migos, too. She’s just done a run of promo interviews with her rapper beau for GQ, the pair dripping in jewels and the freshest fits, and while the couple have also worked together musically (you’ll find his verses on songs like Tip Toes and Emotional), Saweetie comes off as a strong woman with plenty of her own principles.

A self-confessed “homebody” who grew up with a Filipina-Chinese “Tiger mom” and a Black father, the rapper buckled down during college at University Of Southern California so she could really focus on music once she had her degree in Communication and Journalism nailed. It sounds like she’s levelled up greatly for Pretty Bitch Music, too. She told PAPER this year, “I am analysing my body of work so heavily because I really believe this is my time to shine. It's my official footprint into not only the rap game, but the music industry. When you hear this body of work, you are able to understand me as a person.

"I wish this was the project that introduced me as an artist into the game. When you get to listen to Pretty Bitch Music, you will realise why. People don't understand that I rap great over other people's beats with no chords, no bridge, no hooks, because I love to just write straight bars. I wasn't used to writing in song format — like, song format was foreign to my brain. Now that I finally got the gist of it, I can portray what I was giving in my car raps split into songs.”

Chatting to Cool Accidents, she shares the formative experience she had in kindergarten that shaped her future self-image, why she’s determined to fight for the girls who don’t feel like they tick society’s rigid definition of “pretty” and why there’s a deeper reason she samples iconic beats, like she has in recent single Pretty Bitch Freestyle.

Firstly are you home in LA right now, what were you doing before these interviews?

And I can’t even see you!

Congratulations on Tap In which is going off, as well as Pretty Bitch Freestyle! I love the video for Pretty Bitch Freestyle, it feels so personal with so many of those personal photos edited in, even your college degree and graduation photos! Was that song a chance to show people a more intimate side of yourself?

I'm happy that you brought that up because it was definitely the goal of the music video. Pretty Bitch Freestyle reminded me of ICY GRL, it reminded me of Focus or reminded me of ANTI, it reminded me of my early tracks and I feel like the beauty of upcoming artists is that they have to work with lower budget videos. So I shot with the team who did ICY GRL and ANTI, and I was like, give me a low budget video, I want it to feel personal, and I want it to just feel like a blog. So that was definitely the goal of the music video. To feel personal and kind of just like upcoming Saweetie all over again.

Yeah, it felt so DIY but somehow still very slick.

I feel like there's beauty in that though. You know, one thing that I don't want to ever lose about my brand, especially as I continue to get bigger, is just the simple things because sometimes the simple things is what makes your fans love you more and it's more relatable so I definitely shot Pretty Bitch Freestyle with that intent.

Tap In obviously samples Too Short’s Blow The Whistle and your first big hit ICY GRL also sampled Khia's iconic hit My Neck My Back, how do you go about selecting beats to sample and do you have a soft spot for paying homage to other artists this way?

I'm very grateful that the artists who came before me has cleared… *sneezes* Oh, I'm sorry, girl. I got allergies. Anyway, I'm back. I'm very grateful that they cleared those tracks and I definitely have a soft spot for samples because I felt like there's a certain energy that these tracks have and I have yet to find me a producer to give me a modernised beat that gives me that feeling, so you know, it's a process and as I continue to work with plenty of producers I'm pretty sure someone will eventually get me that gift.

I feel like people are still smashing My Neck My Back 18 years later! And that’s the power of an amazing beat.

Oh, none of us did. And then when we found out we were like, “Oh shit.”

Exactly. I would get in trouble for singing that song.

You’ve spoken about Pretty Bitch Music as something for those who are not deemed pretty – it’s such an important message for young girls who are seeing beautiful people all the time on Instagram and thinking they need to look like that too. When you were growing up, did you personally experience low-esteem or anything like that for you to want to help those who don’t feel pretty now?

Fortunately for me, I've had moments of not feeling pretty, but they weren't moments that defined me as a woman. If I can just take you back - so when I was, I believe I was in kindergarten, I was in first grade, so I was six or seven years old. And I remember me and my best friend, my best friend was a lot more smaller than me. I was a big girl growing up, I was a little chunky, but I always felt cute. So I'm not saying it in a bad way, I'm just saying because that's what, you know, my body type was. And we had auditions, we had tried out for a cheerleading team. And I remember they said that I was good, but I was too big to fit into the uniform.

As a child… like, I don't think that's something you should say to a child. But I kind of was a little sad about it. I can do all the moves that the little girls are doing and I kind of didn't understand why [they didn’t want me] but I kind of just took that moment with me. So when I hear other women talking about not being able to fit in or feeling like they don't fit in, I'm able to relate to that. So I kind of wanted to give that power of “pretty” back to my listeners because I've met some bad bitches who are real ugly people, their personalities are ugly, and that makes them an ugly person in my eyes. So for me "pretty" is confidence. It's your energy. It's how you carry yourself. It's how you treat other people. When I say "pretty", I'm redefining it for my fans, because I feel like everybody's uniqueness makes them pretty. Like we shouldn't try to conform to, you know, society's model of what they deem is pretty.

How could they tell a little seven-year-old girl that? That's so outrageous, why not just make a bigger uniform if a girl needs it, right?

Right? And I didn't let it get to me. But it was something that you know, when my mom found out a couple weeks later, because I was kind of sad about it, she was like, ‘did you not hit a move?’ And when I told her, she was upset and she actually went to go talk to them and then they put me on the team, but by that time I was kind of over it. But after that I became an athlete, I started playing football, volleyball, I ran track. So you know, maybe cheerleading wasn’t in my destiny.

It’s awesome to see that we’ve finally gotten to a point where women in rap don’t have to fight for one spot – there’s so many girls now killing it and the appetite is growing for you all. You’ve worked with Jhene Aiko, City Girls, Kehlani – who else is on the list of women you wanna collaborate with?

And if you can pull Rihanna out of retirement, I think we’ll all very much love you for it.

We're all waiting so hopefully, something comes along. We’re all thirsting for that, right?

I love that you studied Communications and Journalism at uni because I did too! What was college life like for you? Were you playing a lot of shows and writing a lot of music or did you keep your head down and study?

Every time I was trying to pursue music when I was in my college career, my grade was suffering, and you know I have an Asian mom, and she really cares about my grades, you know, a Tiger mom. So I figured you know, I'm just gonna give it 100% until I graduate so that I'm able to get my good grades and after I graduated, I just pursued music full on.

I love that you mentioned your Asian mum because me too, I also have parents that are like, study hard and then do whatever you want.

Oh my god, girl. I could hear her in the back of my head every time I thought about skipping class.

You’re one of the few women in rap with an Asian background, as someone who's part Filipino and Chinese. Do you feel like the Filipino musical side of you comes out in your music?

There's actually a song on Pretty Bitch Music when I'm speaking Tagalog, so it'll definitely come out in that song!

Oh, your Filipino and Asian fans will love that!

Yes, and I'm so excited to go over there after quarantine is over.

How are you going in quarantine; what’re you doing to stay sane?

Girl, I'm a homebody. So I'm living for just staying home and not having to hop on a flight every morning. So I'm enjoying it and I'm actually thinking about getting a house, ‘cause LA will probably be in quarantine for the rest of the year. 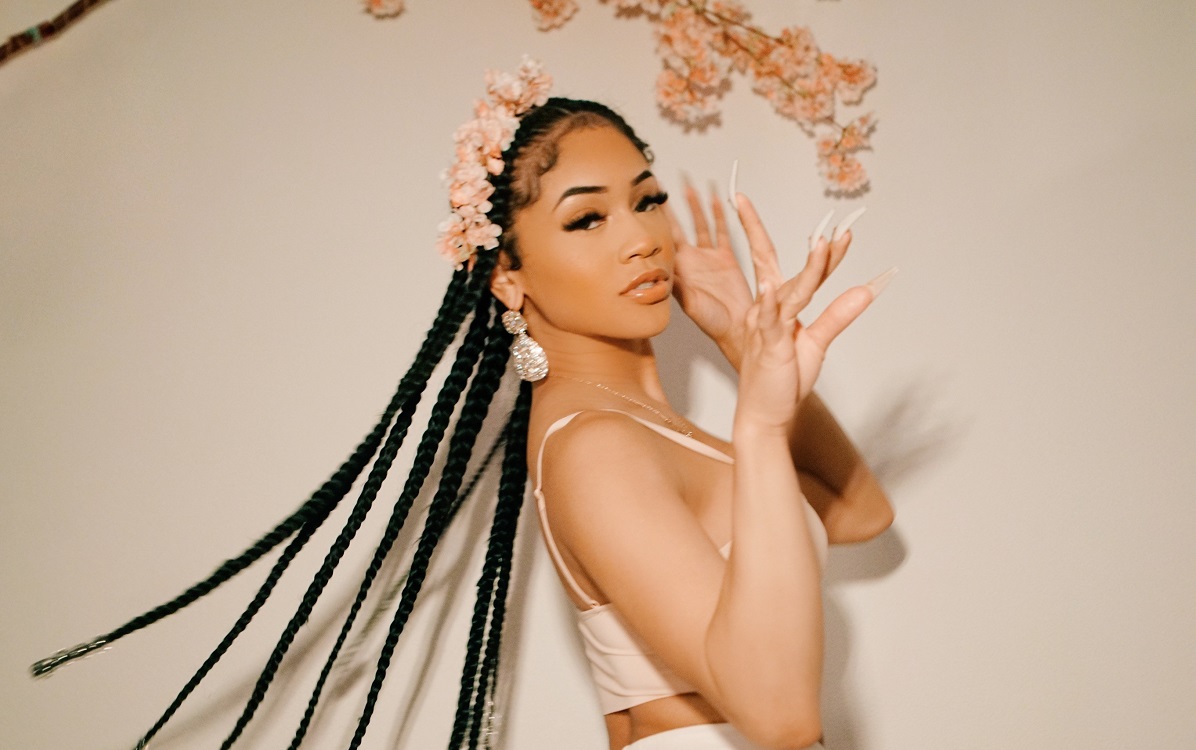