Omar Apollo is ready to be a superstar. On his long-awaited debut album Ivory, the 24-year-old singer showcases his range as a dynamic performer who can bend his otherworldly vocal range to fit any genre or sound.

The slinky Neptunes-produced Tamagotchi is sensual and bouncy, preceded by the Spanish-language corrido ballad En el Olivo. Apollo does rousing guitar-pop (Talk) as well as he does the Blues (Evergreen), building on a bedrock of the psychedelic-tinged R&B that helped bring in his devoted fanbase.

When we catch him, it’s Sunday night in Los Angeles. At midnight, he’ll leave for Portland and start a whirlwind few months on the road on a tour that will take him across the United States, Mexico, Spain and London.

But for now, Omar Apollo is hungry. He’s got sweet potato ravioli on his mind and just the mere mention of food is making the hunger pangs worse.

So, instead, we talk about Ivory, and the highs and lows of working on a first album. A natural storyteller, Apollo is impish and laughs often. In a wide-ranging conversation, he opens up about working with his idols, cancelling an album release and staying authentic as the spotlight on him grows bigger and brighter.

Cool Accidents: How are you feeling about getting back out on the road and going on tour?

Omar Apollo: I’m super excited. It’s been too long. I’ve played a few shows but it’s not the same when you’re not on the road. Being on the road is cool, it’s such a different experience, it’s super fun.

You’re such a natural on stage — I saw you in Melbourne at the start of 2020.

It was such a turned up show. Can you tell me a bit about your time in Australia doing the Laneway Festival circuit?

That felt like camp. I’m still friends with a lot of them — Ruel, Charli XCX, I love her. But it sucked because the last day was when everyone started talking, so it was like ‘Damn, this whole time we’ve just been saying hi but after the last day, everyone was super like, ‘Aw, we don’t wanna leave!’.

Let’s talk about Ivory. I bet you’re really excited to have it out there.

Yeah, I’m super excited to have it out there. I can’t wait. It comes out when I’m on stage so I have to have a draft post ready so I can post it and then go out on stage, and then I’ll be good.

It’s been in the works for so long - is it good to just get it done and have it out there?

Honestly, it’s going to feel crazy. A lot of the songs have been made recently so it’s still really crazy to me. This shit’s still relevant to me.

What was the last song you finished for this album?

Evergreen was the last one turned in.

That song took a second because I made it on Logic with my friend Manny [Barajas]. It was a really simple loop, but I wanted it to be more. So I got my friend Tao [Halm], who I also made Bad Life with, and he got the band together. They all played it and turned it into this really sick arrangement.

You and Tao go back years, right?

Yeah, man, that’s my family! That’s my first friend in LA. I remember when I was like 18, he DM’ed me on SoundCloud and was like, ‘Dude, your shit’s crazy. When you’re in LA, we’ve got to make shit’.

And I went to LA and he was like, ‘Come over!’. He's been my friend ever since.

Tamagotchi is fire. It’s a Neptunes-produced track, but it still feels very much like an Omar Apollo song, too. Was there a clear producer/artist split for this one, or did you get very hands on with the production as well?

Tamagotchi was the last song we made while I was in Miami. I walked in and Pharrell was talking to Freddie Gibbs downstairs.

I don’t know when he made that beat, like that morning or something? I’m not sure. But I just went upstairs and made Tamagotchi, it’s so sick.

I’ve heard there were like 20 people in this place - Freddie Gibbs, Pharrell, Pusha-T was around. How different is that to how you usually make music?

It reminded me of when I was in Indiana making music and I had like, 20 people over. Everyone would be doing their own thing, but also checking in, ‘Aw, man, that’s crazy’ or ‘Aw damn, you should do this’. It was that vibe, it felt very genuine. I feel like that can get lost, so it’s cool to see.

You’ve obviously learned a lot from Pharrell. What insights come to mind from that Miami trip?

I was really having a bad couple of months and I was feeling like shit, so honestly it was a reset. It was affirmation from somebody that I really look up to and it was what I needed at that time. I took everything I learned and I still used it.

You had an album ready that you scrapped two days before a big video shoot. That’s huge. That’s a turning point. Can you tell me about the day you put your foot down and how that went?

It was terrifying, but I felt so good afterwards. Even though I didn’t have any music, I was flexing to everybody like I had a whole album ready. Like, ‘You don’t even know what the fuck I’ve got going on!’. I had to act like I had it together.

You’ve described yourself as more confrontational now, like it’s helped you get through something. I feel like you hear it on the album. Personally is a vulnerable song, but it feels like you’re singing with more agency. Do you feel like your experiences in going through something as major as standing up to a label and scrapping an album has helped you grow as a person?

Definitely, I needed it. That’s how you do business, you’re honest and you say things and you do things — it was me growing up.

I feel like my whole life I’ve just been going with the flow, I wanted to be with the homies just chilling. And it just had to hit me, like, ‘Damn if I don’t say something then this is going to come out’.

It was something that I’ve had a problem doing since I was a little kid so it was just good to be able to say shit. It wasn’t like I was just over here running shit. Like, no, we’re actually going to sit down and have a conversation about it. I’m going to explain everything, we’re all going to ultimately get to a place where everyone is understanding what’s happening.

I’m not saying ‘Oh, I’ll just turn it in whenever’. Nah, I was like, ‘I’m setting a date, this is the date, and we’ll be able to do this, this and this, and right before the tour the album will come out’.

There was a lot more thought than just, ‘I’m going to scrap this album’. I had to come and say something, fully explain it and have ideas to back up everything that’s going on.

You’re very authentic in your music and, in answers like these, you’re very honest. How challenging is that as you’re more in the public eye? Does it frighten you?

People have been telling me that for a long time, ‘you’re so authentic, you’re so genuine’, and I literally have no clue what they mean. I’m just having a conversation. I don’t know, I mean it doesn’t scare me, no, it never has.

When I say authentic, I mean that as a listener I feel like I’m getting to know you. And that may not be the case, I may not know you at all, but your songs are good at making the listener connect with the person, whether that’s you or whether that’s a persona.

That’s really beautiful. The songs are coming from a real place. It’s not made up. Some things might be like when somebody’s telling a story and they spice it up a little bit, but they’re all real emotions and things that I feel.

And yeah, that is a little taxing. It can be a little draining. But after you do it, it gets easier every time. That’s what I’ve learned in life: the things that I’m really afraid of, I know there’s a reason why I should do it if I’m really afraid of it because then there’s growth behind it.

And what scares you the most?

Mmm… what scares me the most? Probably meeting new people that are really getting to know you.

Damn, having to do a whole day of media — I’m proud of you for facing your fears.

Yeah, I won’t be able to sleep later [laughs] nah, I’m just kidding… but, no, what am I most afraid of? Hurting people’s feelings that I love. That’s something I’m really afraid of. Other than that, a lot of shit. I’m an anxious person but it’s whatever, I just get over it, it’s life, you know?

Thanks for the chat, Omar. Best of luck with the album.

Thank you so much, man, appreciate you. 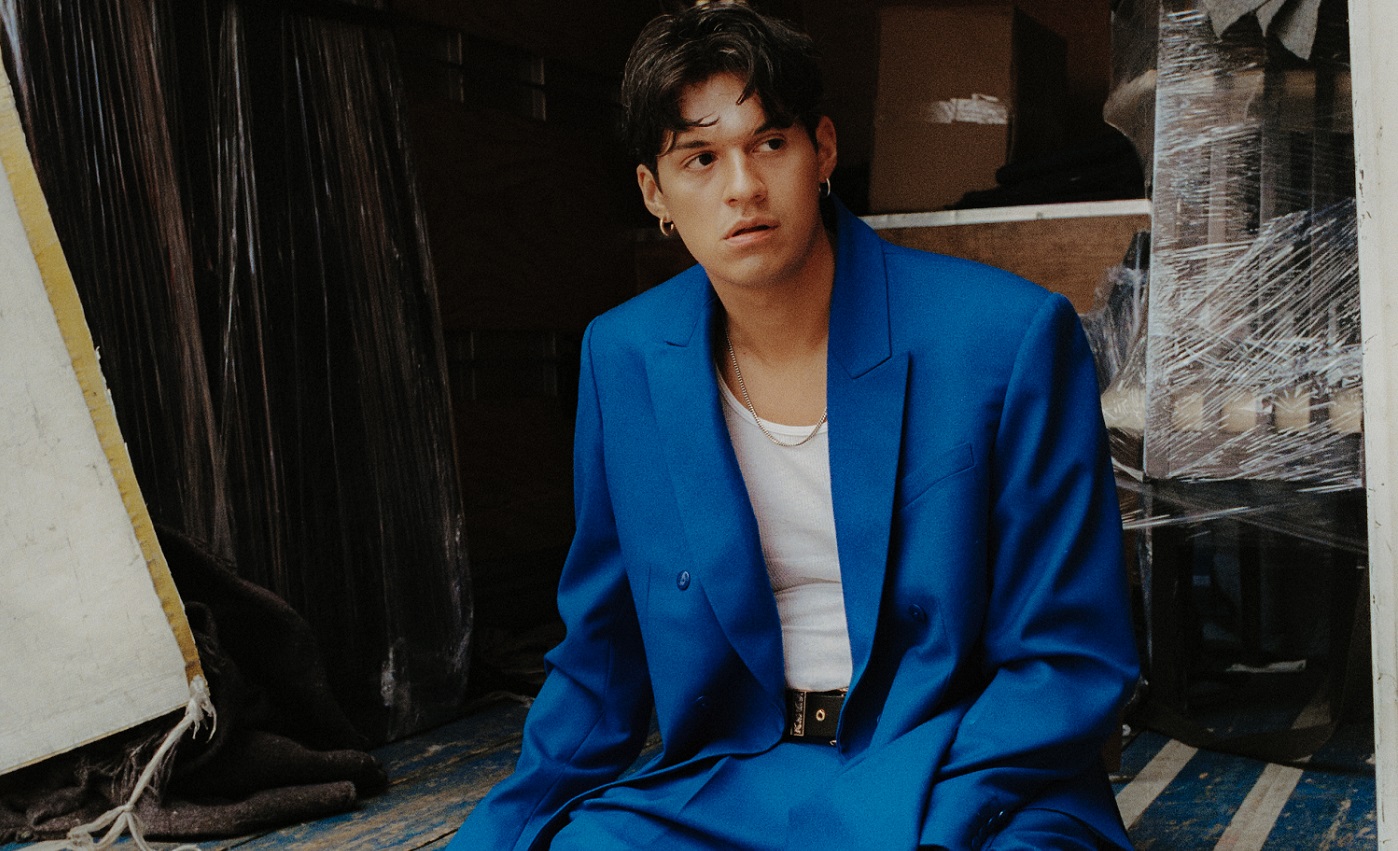