How The Colour Pink Became A Modern Statement In Hip Hop

When you think of the colour pink, what comes to mind? Perhaps the ubiquitous "millennial pink" or maybe it's that one Kanye West lyric from I Am A God ("pink-ass polos with a fuckin' backpack/But everybody know you brought real rap back"). Whatever the shade conjures up, one thing for certain is that no one really turns their noses up at the rosey hue like they used to.

Despite the colour being around since the 17th century, it's continued to be associated with femininity, romance, tenderness, sweetness and sensivity. Around 10 to 20 years ago, those characteristics were perceived as a weaknesses rather than assets, especially in men.

Which brings us to hip-hop and how the conventional braggadocio lent itself to the gangster rap era. Between the '80s and the 2000s, rappers were subjugated to a standard of masculinity that was in and of itself, a caricature of manhood, often leading to dangerous ideas and attitudes that were passed down to fans who perpetuated these views.

This form of masculinity is often referred to as "toxic masculinity," a traditional idea that isn't just harmful to men but also to women, and society overall.

The worst thing about toxic masculinity is that it thrives on the concept that femininity is weak, as are all feelings and ideas associated with that, whether that's crying, being vulnerable or wearing the colour pink.

If you go back and listen to hip-hop from a few decades ago, it's blatantly clear that hypermasculinity was rewarded over anything else. But luckily, over the years, we've seen this change dramatically thanks to the proliferation of women and the LGBTQ+ community in the genre. More than anything we've seen a generational shift in attitudes towards femininity, which has trickled down into how rappers interact with things as banal and yet political as the colour pink — and we love it.

One artist who isn't afraid to show his softer side is R&B and soul singer Pink Sweat$. The Philadelphia singer almost exclusively dresses in pink, whether that's a blush denim ensemble, rosy hoodies, or pastel pink t-shirts. He even accessorises with the color from vibrant flowers and plush toys to bubblegum backgrounds. Once you wade through all the pink, what stands out about Sweat$ is his bottom line: femininity is beautiful.

"I never degrade women; that’s intentional," he told Rolling Stone in an interview. "I wear pink. That’s not typical for the history of R&B.”

"He told me yesterday that his bedsheets are pink; that’s dedication,” Miles Beard, an A&R who signed Sweat$ also told the publication.

His thesis on life is woven throughout his work and manifests itself across powdery, guitar-kissed meditations on love. The release of Sweat$', The Prelude EP is an exciting amalgamation of everything his fans have come to know about the artist. Among the romantic soliloquies and bold guitar riffs there is more pink than ever before.

But what came before Pink Sweat$ is just as important. Over the last two decades, artists like Cam'ron, Nicki Minaj, and Kanye have paved the way for a world where pink and femininity represent universal strength. From marginalised queer rappers, to hip-hop progenitors, it's easy to forget the bright history behind the colour pink, so let's get into it.

INTERVIEW: Why Pink Sweat$ Makes Music That Is The Opposite Of What You Expect

At Mercedez-Benz Fashion Week in 2002, New York rapper Cam'ron decided to put something on that would stand out. That resulted in one of the most iconic hip-hop moments. Through wearing a pink fur coat and accessorised with a pastel pink phone, Cam'ron's photo became as recognisable in hip hop as the Mona Lisa.

"Cam was the first hard-core rapper to rock pink," Emil Wilbekin, a former editor in chief of Vibe magazine told The New York Times. "What was interesting was how quickly the streets caught on." Sonya Magett, a stylist and photographer added that pink on men "was considered very strange in the urban market" when Cam'ron was wearing it, despite how common it is today.

You can't talk about the proliferation of the colour pink without recognising the influence of the queer community on hip-hop. New Orleans bounce existed before 2005, but when Hurricane Katrina devastated the city it also lit a fire underneath artists like Big Freedia, Katey Red and Sissy Nobby. Many moved out of New Orleans but returned months later when it was safe to. Realising it was essential to give people a way to feel joy once again, they started FEMA Fridays. "The first club that reopened in New Orleans was Caesar's, and they called me immediately and said let's do a regular night with you here. So we started FEMA Fridays," Freedia told Nola.com. "It was the only club open in the city, and a lot of people had a lot of money from Katrina, the checks and stuff, so the joy inside that club — I don't think that'll ever come back."

The rise of New Orleans Bounce also helped change the face of hip-hop and what it meant to be a rapper. It wasn't long before Freedia was embraced by the likes of Drake and Beyoncé and brought into the mainstream.

When Kanye released his debut album The College Dropout, he introduced the world to a new brand of hip-hop that challenged the genre sonically, lyrically and most of all with his iconoclastic fashion.

This era of the Chicago rappers saw him irreverently dress in pastel-coloured polo shirts by Ralph Lauren. Then the release of the music video for All Falls Down saw the rapper wear his recognisable pink polo with a mustard stain on the front. It wasn't long before stores were selling replicas of this for over $400.

In 2020, during an interview with i-D, West admitted to Pharrell Williams that he was actually the inspiration behind the pink polo: "You’re the inspiration. Before I wore a pink polo you were wearing a pink polo. That lineage is mapped out and proven, and you can go from then all the way up to the moment we have in culture now. You broke down the doors in fashion for us.”

Just because Cam'ron had taken everyone's breath away with his pink fur ensemble doesn't mean Kanye got off easy for his polos. In 2009, the rapper spoke to MTV about how rappers like 50 Cent had questioned his sexuality because of his propensity for blush tones. Following a homophobic diss from 50, Kanye went on to explain everything we collectively agree on today.

"I mean how is that a gay thing? Colours? Having a lot of colours is gay?" he told MTV.

What do you think is Nicki Minaj's favourite colour? In 2010, the rapper's verse on West's Monster propelled her to superstardom and the iconic lyric "pink wig thick ass give 'em whip lash," is the most recited line from her feature. While she always give us range with her wigs, she looks amazing in pink. Notably, as more women entered the rap scene, associating pink with weakness or using it to bolster homophobic rhetoric was leaving behind a bad taste and fans were becoming more conscious of the problems with this attitude.

In 2011, Lil Wayne made headlines for donning a pair of hot pink sweatpants while performing at the Cruzan Amphitheatre in Florida. In fact, throughout 2011, Wayne sported the rosey hue many times and still does today.

In 2011, Lil B established the Task Force, a name given to his dedicated community of fans. Armed with a list of duties that spanned protecting Lil B at all costs as well as enlightening his haters online, the Task Force are like a stan group with empathy. Most of all, the Task Force was marked by a recognisable signifier: pink bandanas.

So when the rapper released Pink Bandanna Party in 2013, it tied everything together.

By the time 2014 rolled around, the momentum around the colour pink was gaining steam. Fashion pioneer, Andre 3000 jumped on the trend early by turning up to Splendour In The Grass with a baby pink wig and the most perfect jumpsuit.

Hotline Bling was a cultural moment. Over the last five years, the song and its aesthetic has influenced how music has been constructed both visually and sonically. It was also the coronation of Drake as a hip-hop heavyweight, who as a rapper that touted vulnerability, built a career on sharing his feelings - whether that was anger, sadness, or jealousy - and most of all didn't shy away from femininity. The James Turrell-inspired video for Hotline Bling saw scenes washed with neon magenta lights that reflected onto Drake, his costars and their clothing.

Drake's flirtation with pink hues didn't end with Hotline Bling and went onto influence his style. In an Instagram post from June, 2016 the rapper sported a fuschia jersey with matching sunglasses.

That same year, Wiz Khalifa turned up to the iHeartRadio Music Awards in an electric pink shirt with lashings of gold jewellery.

Later, DRAM released Cash Machine, a crisp R&B track that sees the singer bike around a neighbourhood in a sherbet-coloured sweatshirt, shooting bills out of a pink cash cannon money gun.

Though, the way Solange is beautifully engulfed by this bubblegum dress in the video of Cranes In The Sky still takes our breath away.

As 2017 rolled around, hip-hop continued to transform and the emergence of emo rap changed the way many thought about mental health in relation to the genre. The late Lil Peep, who became one of the early progenitors of emo rap, embraced pink, with his bright flamingo-coloured hair, rouge outfits and fuchsia merch.

Despite his success - thanks to XO TOUR Llif3 - and how far society and commentary had come in terms of femininity and wearing pink, Lil Uzi Vert was criticised for his pink and black striped Valentino shirt. It wasn't just the barrage of memes equating Uzi's pink ensemble to being a woman but the celebrity comments that also followed. 50 Cent once again shared some off comments, while Tyrese Gibson weighed in with some critiques before deleting his comments.

Uzi was unbothered, admitting it wasn't on him to make people understand. "You know what it is? They've never felt these fabrics before," he quibbed at the 2017 Billboard Music Awards after being asked if he was bothered by people talking about his feminine looks.

Two years after Uzi was dragged for his pink threads, both A$AP Rocky and Post Malone turned up to the Grammys in the most extravagant outfits. While Rocky showed off a strawberry coat, Posty ran with a pastel, rhinestone leather number with matching shoes.

This year, it's clear that turning your nose up at the colour pink is completely passé, which means we've been treated to some of the most dazzling fuschia looks in recent memory. Our favourite has to be Lil Nas X at the Grammys wearing the hot pink Versace outfit of our dreams. 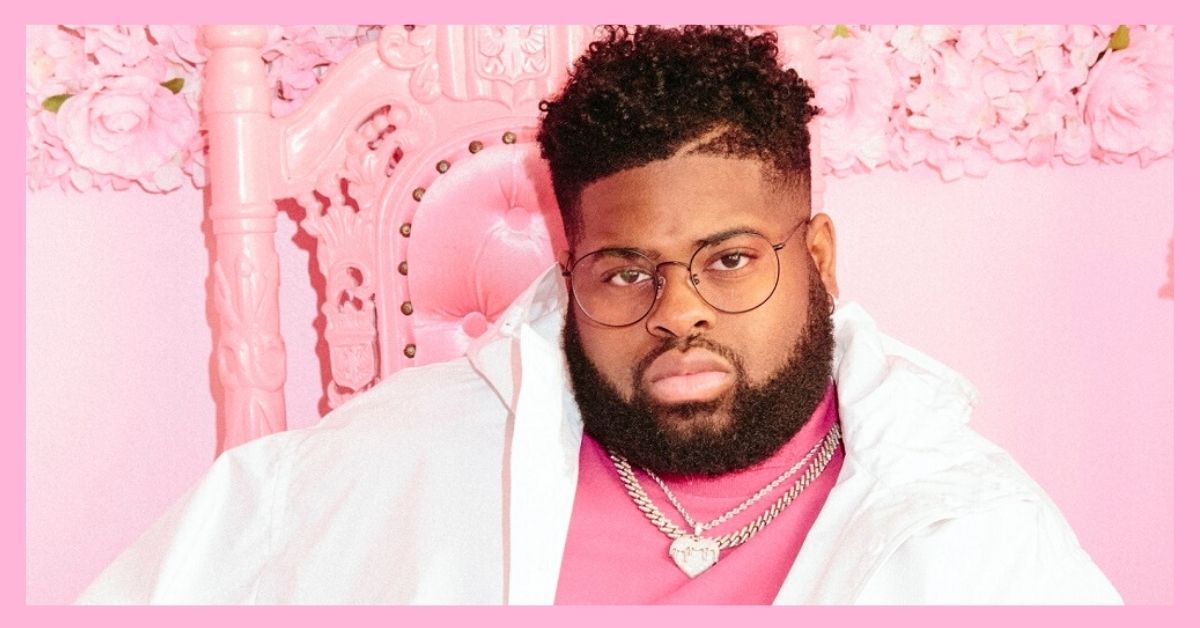