INTERVIEW: How daine Is Paving The New Wave Of Girls In Emo

Her gloomy, spiritual and borderline morbid visuals have been spellbinding to consume, casting an aura of mystery around the young emo singer, but 17-year-old daine is forthcoming about how "blessed" she's been living with her family during the tumultuous Victorian lockdowns, finding her footing when singing and producing and how important it was having a female mentor in the hardcore scene.

It's in that same lockdown period that we've met daine musically through a number of promising and fascinating official releases - first, Picking Flowers, then My Way Out and now Ascension, three nihilistic songs rooted in Midwestern emo-influenced bands like American Football, Turnstile and Basement, with the flourishes of modern day trap and the gentle cadences of daine's quiet disillusionment.

It's a refreshingly new combination of the two popular genres, and even more fresh is the fact it's being championed by a young Filipino-Australian woman, in a climate where we've realised that the emo scene has historically been consumed heavily by women, but at the same time not afforded the respect to women that they deserve. daine's music and social presence feels like a metaphorical middle finger to all of that, where she unapologetically edits impish fairy wings onto her photos, wears girlish pleated skirts and creates Twilight-themed songs on SoundCloud, laying claim to the space in emo she should've always had.

Firstly, you’re Melbourne based so I have to ask, how are you feeling having spent most of the year now in lockdown? Are you feeling creative or has it been really tough to find motivation to write?

It comes in bursts. But like, I'm someone who gets inspiration from like, momentum in life, which obviously that hasn't been much of a thing this year. So I would say I'm less inspired than usual, which sucks.

So usually you'd go out and do stuff and that would spur on some sort of an idea.

Exactly. Like when you're out doing things. You're seeing people, you're feeling stuff... lockdown is so empty, honestly, as edgy and fake deep as it sounds. It’s so empty. I like routines. Like waking up, making tea, doing something nice. I guess that's a leisure that, you know, wouldn't have been afforded had lockdown not been a thing but still, it's not ideal.

Do you live at home?

Yeah, with my mum and dad. It's a very happy household mostly. I can't imagine if I had a sucky relationship with my parents. I think I would go insane. Feeling blessed.

I know you’re big on wellbeing and veganism and crystals and stuff, has that helped bring a sense of constancy to this turbulent year?

I think that grounds me through anything ever. Yeah, of course. It's definitely constancy like anything. Yeah, I guess just like waking up in the morning, having a green smoothie, going for a walk, listening to frequencies or whatever, it just makes you feel better. I think it's just like any other self-care habit. It's good.

So in this interview, I really wanted to go right back and learn about your story into music because I find your trap meets Midwest emo influence super interesting. I grew up a punk kid myself, so take me from the top – how did you get into these bands, how old were you?

The more I think about it, yeah, actually, it's kind of weird, but I think I was like 11 or 12? I saw State Champs live with Neck Deep, and I was like, ‘okay, this is it. This is my pop punk phase.’ But once I got to like, 13 I was like, ‘wait a minute, pop punk is kind of cringe. There’s more emo stuff that has like more layers and like, less annoying American accents.’ With pop punk, I still like, know every song that comes on, word for word! They get nostalgia points, it’s still good, but I won’t admit it!

What were you like in school? Were you in a band or take music as a subject; were your friends all music lovers?

I did take music as a subject and I wanted so badly to be in a band. But like, stylistically, I don't think anyone was into the same sort of stuff that I was. And I tried to start a band with like, two of my friends and it failed miserably. We had no idea what we were doing. And I was like, ‘you know what, this is just easier to do on my own.’ So I just started writing. It's like, I didn't even want to be a singer. I'd never wanted to be in that position. But it was like, ‘I can't make a band, so I guess I'm just gonna have to do it all myself.’ That's why I think maybe I'm lacking the confidence as a vocalist, because it is just sort of like a necessity rather than like, something I wanted to do.

I still, like, don't know how to. I can sort of make beats now. But I started guitar lessons when I was like, seven.

Is your family musical too? I know you have a Filipino background and music is such a big part of the culture.

I wish! No, no, no one has like any idea about anything musical. But I guess it's kind of good, it’s my little world.

What’s the goal for you musically and career wise, is it to make this Midwest emo/trap fusion palatable to the masses, or do you wanna move into a more mainstream rap world eventually, or do you wanna front an emo trap band – have you thought that far?

I think I'm already sort of like, blending it into the mainstream. I don't know whether that was my intention. I think maybe it was, because I guess no one has really done the whole sort of like underground rap thing into the mainstream, except maybe like Juice WRLD or Lil Peep. And I was a determined, fiery, 15-year-old going, 'wait, a girl hasn't done this, like, I should do this.' But now I feel like my sound is becoming a little bit more pop-leaning and a little bit more mainstream. And everyone's saying, ‘I don't hear the emo influence, or I didn't even hear the trap influence. Like, this is just like sad pop music,’ and I'm like, oh, whatever. But yeah, I still think it's like, underground. I still think you know, when I'm writing with my guitar, it's heavily emo-influenced, so that's where it's coming from.

There have been many articles written about the proliferation of misogyny in the 2000s emo scene, obviously bands like Brand New come to mind but heaps of others have a history of writing about women as possessions to win or lose or comfort, and there was not really a place for women in the genre. What are your thoughts on that, did you grow up listening to this stuff and feeling excluded?

YES, and listening to bands like Brand New and Moose Blood, even Trophy Eyes - sorry, Australia, Trophy Eyes has some weird lyrics. I was obsessed with them, I’ve met them like five times, a straight up fangirl.

I think I was like a young teenager listening to lyrics, that kind of like, damaged my idea of love and I think I have leaned towards too many quiet incel boys thinking that they're better than like, comfortable, confident boys. Because it's like, ‘oh, it's deep. It emotionally means something!’ But it doesn't. Not having healthy interactions with women is not deep. It's not emotional. It’s just lame.

Historically emo does romanticise whack shit like that, which I'm not a fan of but, I mean, it always pissed me off not seeing any women in the scene but I guess what can you do? I was just like, 'I'll pick up my guitar. I'll try.' I went to Girls Rock! when I was like 15 and that really encouraged me. My band coach Maz was in this screamo band and she was amazing, I was like, ‘okay, so there are women in hardcore and in emo and I can do this.' That's the most important thing, mentorship from women in the scene, which isn't something that's super accessible right now. But hopefully I can do my bit.

It's awesome that Girls Rock! even exists because like, who knows if you would have been as confident to step into the world had you not gone to that camp, right?

You’ve been dropping skits on Soundcloud recently, love the Twilight skit, how long does it take to put together a song like that?

I'll usually write it in one night and then maybe re-record over the course of a week to get the vocal good. And then I don't know, it'll get mixed and mastered within another week for maybe like, two and a half weeks all up? Yeah, I was excited because I was just like, ‘okay, I'm just gonna quickly churn out what was left of my lockdown brain and drop it and we'll see if people enjoy it. I didn't really expect any response from it, I just thought I’d just put it out there and maybe like a few people would like it.

You’ve just dropped Ascension which you worked with Lonelyspeck on, they are amazing. I know this song has some heavier influences – what can you tell me about its inspirations and what the song’s about?

I think Ascension was the first song I ever wrote, so I was 15. On the original my voice is so like, baby. I sound so different to how I sound now. It was like a really basic riff but basically, I was really sad because my first ever boyfriend was like, always out with his friends and I didn't have any friends. I was a bit of a loner and I didn't really do anything with my life and my parents didn't really let me go out much and like, he was out doing drugs and cool stuff, and I was like, ‘wow, yeah, I feel like this isn't for me.’ I was pretty young and emo. I was just sad I guess.

Lonelyspeck re-produced it and flipped it around but yeah, we said that we wanted like a riff pretty similar to the original except this time it's making it heavier and more intense and I think the contrast is really telling because in the first one I'm very soft.

Who is an artist that we would be super surprised to know that you love?

All right, let's have a look at my recently saved Spotify. I love Darcy Baylis, we're definitely gonna work on something when he comes back to Melbourne. Okay, there’s some Rihanna which people wouldn’t think I’d pick, there’s multiple Rihannas. There’s some Britney Spears in here. City Girls, Chief Keef, Taylor Swift, it’s a mess! 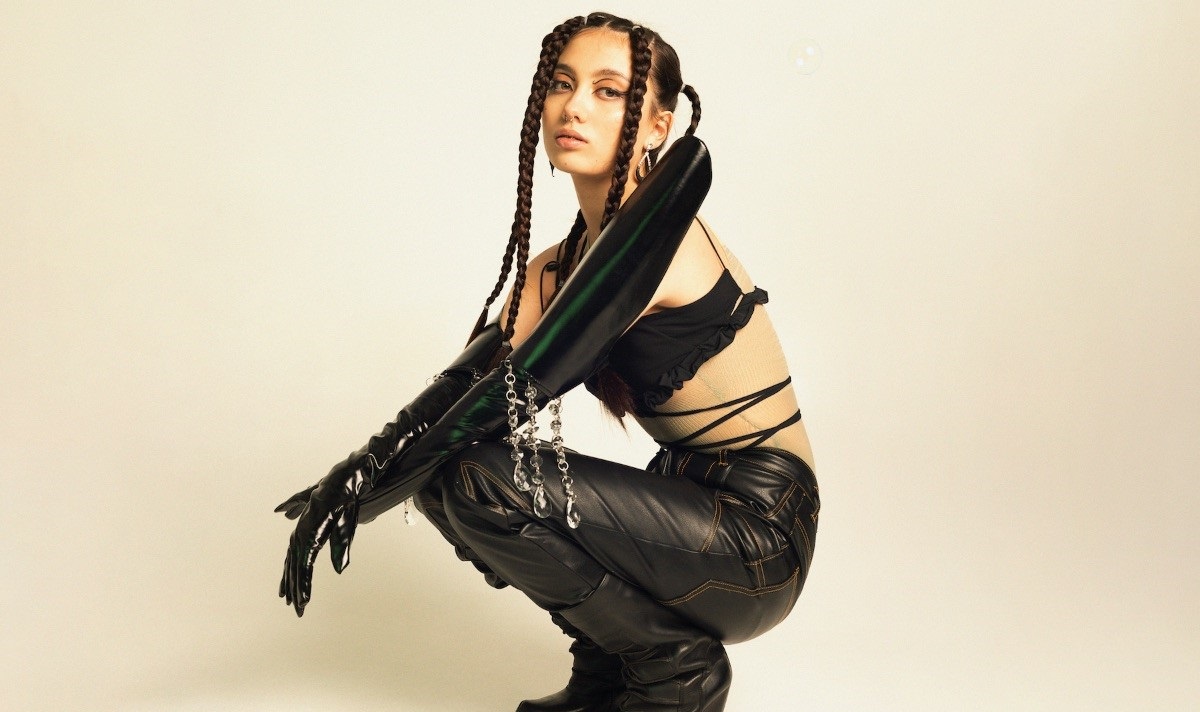